Can you tell me about your background and why you founded Epic Girl?

My background is in Anti Trafficking and Healthcare. I worked for Abolition International and Hope for Justice as the Executive Director for 12 years. I worked internationally and in the United States. I started to wonder how we could stop this from happening in the first place. What was the common denominator defining the population that I was working with? It ended up being that most of the girls had come through our juvenile court systems and were extremely vulnerable. I envisioned a preventative organization that empowered girls before they became victims. I wanted to see them get their voice and identity from a place of strength.

A lot of people have asked me over the past two years why I decided to start EPIC Girl. I could give a long, drawn out answer, and sometimes I do (let’s be honest- short answers aren’t my forte). But if I had to narrow it down, I would say this:

I’ve always understood that it can be harder for women to do things. Career things. In life, we are often told “girls don’t do that” or “that’s not a job suited for a woman”. And then even after we leap obstacles and persevere through the task of balancing of family and career, we are told things like “you only got this because you’re pretty” or “maybe you should just observe”. We are punished for speaking our minds, chastised for having opinions, and called pushy, aggressive and difficult.

So I started EPIC Girl because I saw girls like me who had dreams and just needed help realizing them. These girls had an unfair disadvantage because of the hand they were dealt. Yet they still had this glint in their eyes that said “I want more”. I just couldn’t stand the thought of them floundering, trying to find their way amidst all the messages saying we can’t have it all or we’re not worthy or good enough. So I thought “hmmm… What if a lot of strong, empowered, sometimes pushy, complex and beautiful women got together and said to the younger women “you’ve got this”? That would be EPIC!! We should start that and change the world and inspire each other to go for it.” And so we did. We started EPIC Girl and we are strong, and beautiful, opinionated and EPIC.

What is the process for a girl like when they find Epic Girl, and how do they find you?

96% of our girls come through the Juvenile Court System in Tennessee.They are 12- to 17-years-old. Every Wednesday we offer a class at the court that’s two hours long. It’s our core “Identity Class”. We ask girls right away, “What are you good at? What are your talents?” We try to immediately teach them that identifying from their place of weakness, rather than their strength zones, can set up them for a series of problems. We want them to understand that they are strong, they have gifts to offer the world, and that they don’t have to be stuck in a system that can hold them back.

After that class, they are offered mentorship through the Epic Girl Program. If they want to be paired with mentors, they first have to take our 5 classes and graduate. Our first four classes focus on healthy relationships, boundaries, resolving conflict and setting realistic expectations. The fifth class is taught by the Nashville Sexual Assault Center and talks to them about sex, relationships, and links them with resources in the community.

After that, our mentoring program uses a unique dual mentorship model where each girl receives 2 adult mentors who work in partnership to provide stability, consistency, and accountability.
They can stay in Epic Girl as long as they want. After they complete the program, we encourage them to come back and mentor other girls. We have 12 girls that have graduated our program serving as mentors right now.

What is your favorite part of the Epic Girl Program?

Watching girls find their voice. It’s something we tell them over and over but when they finally get it, it’s just magical. When they grasp the idea that their story and possibly their pain has purpose, they are unstoppable. Then I feel like EPIC Girl is really empowering girls to be their best selves.

You have a unique approach in how much you work with other non-profits in Nashville. Can you talk about that a bit?

You are only as good as your team. Non-profits don’t always play nice with others in the field. We live in this weird space of competing for funds and justifying every cent we spend. That makes us competitive and not always very team oriented. The EG team shares the load together. We work 14-hour-days when we are needed. We teach at local high schools sometimes for free. We spend countless hours coming up with games and activities, planning graduations, and crying for our girls who are going through hard stuff. My team saves me everyday. I am beyond grateful for their passion, commitment and sacrifice. They were meant for this and I’m just glad to be on their team.

Additionally, we celebrate all the other non-profits who come alongside us, celebrate us, and provide added support to the awesome girls we love so much. The Oasis Center, The Sexual Assault Center, YODA, The REAL Program, Juvenile Court Davidson County, DCS, The Public Defender’s Office, Juvenile Court Williamson County all stand in the gap with us and we couldn’t do this work without them!

100% of the profits from the Never Let Go fundraiser put on by The Southern Squeeze Gym on Feb 3 will go to Epic Girl. Can you talk a little bit about how you plan to use the funds?

We’ll use it to help train girls to be successful in their mentoring experience through the prep classes, and to train more mentors to pour into our girls. It costs about $400/Girl to complete the entire program and get connected to their mentors. So your contribution will connect more girls to mentors!

What is something you’ve learned in running this program that you want to share with us?

Different people are really the same. That sounds weird, I know. But something I didn’t expect to gain was these beautiful friendships. I learned that though we look different, our experiences are different, and our views may be different; many of our desires are the same. We never disagree on wanting great things for our girls. We’ve prepared over 40 women to mentor and it’s been a privilege to walk alongside them. We are all learning that the girls teach us all a thing or two along the way too.

How can someone get involved in mentoring and be helpful to Epic Girl?

Go to the website and fill out an application. You’ll be contacted to set up training classes. All of our mentors must submit to a background check and complete classes to prepare them to serve their EPIC Girl. Contact Charity@epicgirl.net for more information.

All mentors must agree to work on a team, commit to a year at minimum and follow the policies and procedures of EPIC Girl. If someone wants to be involved but can’t commit to mentoring at this time there are still plenty of ways to connect. Host an event, volunteer to help with events, talk to your church or community group about EPIC Girl, give to support our work.

What does the future of Epic Girl look like to you?

In terms of our dreams for EG, we have a lot of those. One is obviously to develop sustainable programs that people believe in and are committed to helping fund. That’s always something non-profits are thinking about. We’re still a small, start-up which offers challenges and we’re committed to working with the community in such a way that they engage with what we’re doing.

We have dreams to start a legal fund and work with area attorneys who specialize with system involved youth represent them so that they get the best access to services whether it’s housing or counseling. And finally, we really want to start a transitional living home for girls who age out of their current living situations and need a place to stay while they accomplish their goals.

WE FOCUS ON DEFINING OUR PAST AND RECOGNIZING HOW IT CAN SHAPE US BUT NOT ALLOWING IT TO DEFINE OUR FUTURE.

AT EPIC GIRL, WE BELIEVE EVERY GIRL IS ONE MEANINGFUL CONNECTION AWAY FROM BECOMING THE HERO THEY ARE MEANT TO BE.

WE’VE TRAINED OVER 200 GIRLS UTILIZING OUR IDENTITY CURRICULUM.  OUR GOAL IS TO HELP AT- RISK GIRLS RECOGNIZE VULNERABILITIES IN THEIR HISTORY, EDUCATE THEM ON POTENTIAL NEGATIVE CONSEQUENCES OF THESE ISSUES, AND GIVE THEM OPPORTUNITIES TO CONNECT WITH RESOURCES. WE WORK COLLABORATIVELY WITH JUVENILE PROBATION/COURT, DETENTION, FOSTER CARE AGENCIES, AT-RISK YOUTH PROGRAMS AND THE DEPARTMENT OF CHILDREN’S SERVICES.

52% OF THE GIRLS WE SEE ASK FOR OPPORTUNITIES TO CONNECT WITH ADULT MENTORS TO HELP PROVIDE STABILITY AND ENCOURAGEMENT.  SHORT TERM DATA IN COLLABORATION WITH DAVIDSON COUNTY JUVENILE COURT PROBATION HAS SHOWN THAT GIRLS WHO TAKE THE EPIC GIRL IDENTITY TRAINING ARE LESS LIKELY TO RE-ENTER THE COURT SYSTEM. 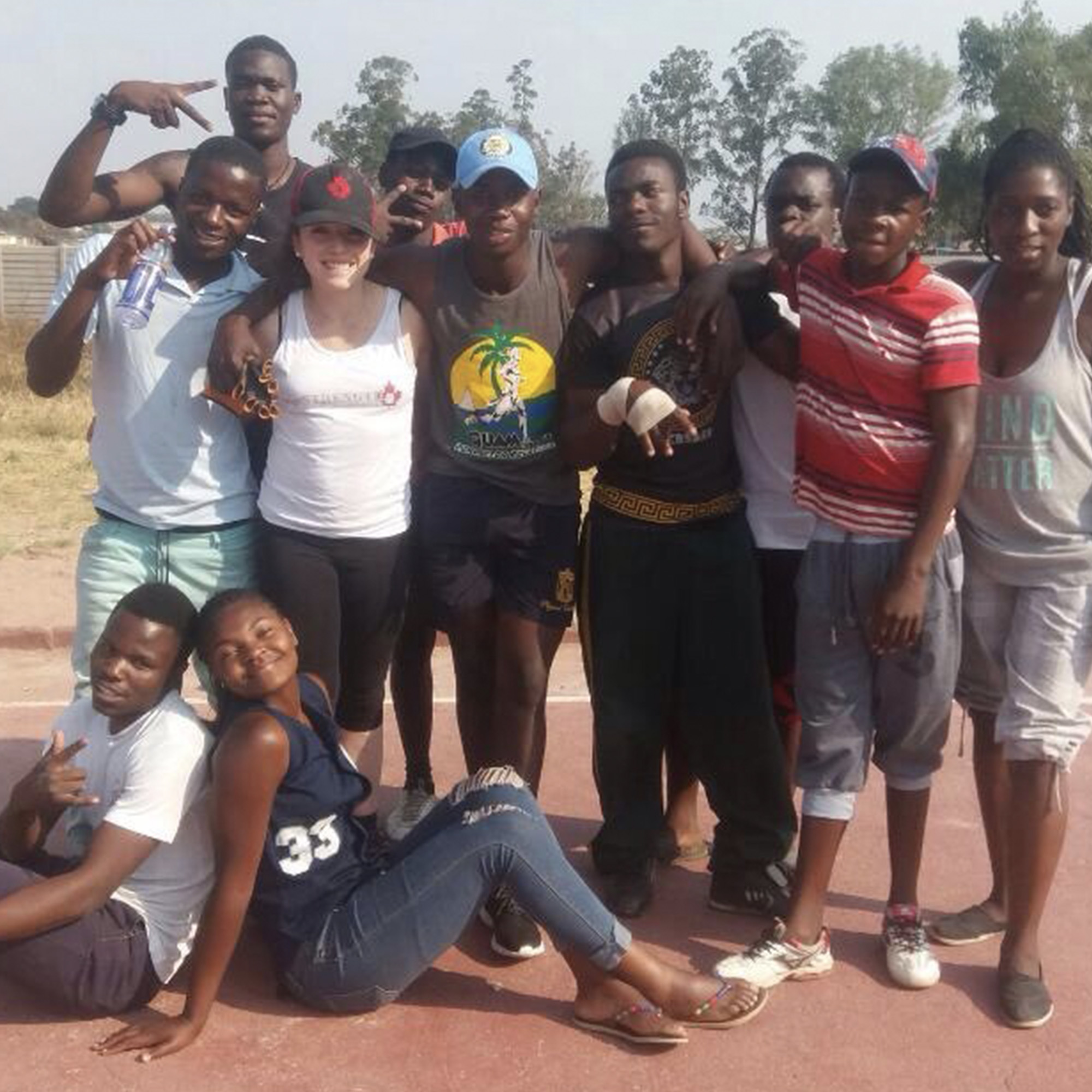 Powerlifting in Zimbabwe: “I HOPE TO LEAD BY EXAMPLE, SO THAT WE CAN CREATE CHANGE.”Articles, Athletes, Interviews, Lift 4 Life Worldwide, Nonprofits, Powerlifting