Endometriosis is vastly under-researched, and research is underfunded. I’m hoping that by talking about my story I can bring hope and understanding to others—those living with it, as well as their families, friends, colleagues, doctors, and the organizations making decisions that impact their lives

“The TUE committee has reviewed your application. Your request has been denied.”

I live with endometriosis, a disease which can cause extreme, unbearable pain and for which treatment options are incredibly limited. Despite living with the excruciating pain of endometriosis for 10 years, these twelve words denying my participation in a USA Powerlifting (USAPL) competition hurt more than any pain I’d ever experienced.

Ironically, the pain that I experience from endometriosis was central to this decision. And while the USAPL’s decision broke my heart, it reinforced what I, and the millions of other women living with endometriosis have long known: endometriosis is under-researched, treatment options are incredibly limited, and too many people, including those in the medical community, just don’t know enough about it.

Endometriosis causes uterine tissue, which is intended to be discarded by our bodies during menstruation, to instead grow within my body, attaching itself to various organs and causing an array of health issues and extreme, excruciating pain.

Endo pain hits anywhere at any time. It’s this gut wrenching, stop-you-in-your-tracks kind of pain. For me, it feels like someone has their hand on my internal organs and they’re continuing to squeeze harder and harder while simultaneously torching my guts. It’s the kind of pain that will send me into the fetal position and highjack my focus. My skin bothers me. I’m hot, I’m cold, I’m sweating, I’m shaking.

This was happening daily. I’ve hit the floor in crippling pain at work, in meetings, at the grocery store, in my car on a road trip; it happens anywhere. I bloat to the size of a small island (this is the perfect illustration). My energy levels remain at zero no matter how much sleep I get. Endometriosis is very difficult to live with.

Affecting one in ten women worldwide—including one of the five Spice Girls—endometriosis is so much more common than most realize. It’s likely that you or someone you know suffers in silence. Yes, silence.

Because the symptoms of endometriosis are tied to menstruation, it’s treated as a taboo topic.

I’m hoping that by talking about my story I can bring hope and understanding to others—those living with it, as well as their families, friends, colleagues, doctors, and the organizations making decisions that impact their lives.

As with most diseases, endometriosis presents itself differently in every woman, which is part of the reason it’s not a household term and why it’s such a challenge to diagnose. Lucky for me, it only took five years and two doctors for me to put a name to my issues. Statistics show that it takes and average of a decade and 8 doctors for some women to receive an accurate diagnosis. There are far too many instances reported of doctors dismissing patients’ complaints as women just complaining of period cramps when, in actuality, if these symptoms were taken more seriously, patients could be diagnosed—and seek treatment—much earlier in life.

After dealing with five years of undiagnosed symptoms, chief among them extreme, unbearable pain, I met Dr. Kent Branson. This man changed my life. It was during my initial appointment with Dr. Branson that I first heard the word “endometriosis.”

At this point, I was bleeding every day and had been for an entire year, along with suffering from the extreme, life-altering pain that often accompanies endometriosis.

I was bleeding every day for a year.

This isn’t normal, but it was so easily dismissed by previous doctors, so it had been easy for me to dismiss, as well.

Dr. Branson conducted all the routine tests, did ultrasounds, and still found no evidence of endometriosis. Having previously gone through a battery of tests with my previous doctor to find no answer, I was deeply devastated to remain facing horrendous symptoms and no diagnosis. It takes a lot out of a person to search and search and not get any closer to an answer.

Dr. Branson let me know that, while I did not show signs of endometriosis on paper, he heard me, saw my medical history, and suggested he still perform the laparoscopic surgery needed to truly diagnose endometriosis.

While there are indicators of endometriosis, surgery remains the only way to officially diagnose the disease.

I recall, with an unusual degree of clarity, coming to after my surgery: the first words out of my mouth were, “do I have it?” He confirmed that I did, and I instantly started crying.

I finally had a name for all of the pain, and all because a doctor took the time to really listen to what I had been experiencing and, instead of dismissing it when the screening tests didn’t indicate anything, kept seeking the source of my issues. For that, I’ll always be grateful.

Before being diagnosed with endometriosis, my primary care doctor had prescribed me pain medication to temper the debilitating pain that tended to concentrate in my lower back. I hated that I was on pain medication, especially considering the stigma associated with people on opioids, regardless of whether said person has a legitimate need and prescription from their doctor.

I wanted to eliminate prescription pain medications from my life, so, I worked with a pain doctor to identify alternative treatments for my endo pain. I tried topical ointments, CBD oil, I got several cortisone shots in my back, and I began seeing a chiropractor and getting regular massages. While these things helped, nothing alleviated my pain enough to allow for a normal quality of life. On top of this, I was also requiring anti-nausea medication as the pain was so bad, I was vomiting regularly.

After the surgery, I had an IUD implanted, which was supposed to help with the symptoms, and it did some. I now only bleed about 50% of the time and the pain has definitely decreased, however, it’s still very prevalent.

As part of my journey to a healthier place overall, almost two years ago, I started powerlifting. It has been one of the best things I’ve ever gotten involved with. Powerlifting has given me the tools and training to become stronger, both mentally and physically.

In September 2016, I competed in my very first meet and set a Missouri deadlift record! I fell in love—it was then that I knew this was my sport.

Training with endometriosis has been challenging and it definitely taxes my mental strength just as much, if not more than my physical strength. My coach, Kyle Whitcher, has been absolutely instrumental in my success as a powerlifter. When we first began training together, he would send me home if I showed any signs of endo pain.

Now, I know my body incredibly well. I can tell when my body is upset and can feel the pain build, so I usually know when it’s coming. I’ve been able to squat my max weight while under some intense pain. Squatting is the hardest lift to complete when my core is under duress. Squatting requires you to brace your core and I’m able to still do that when my endo is in full swing. My coach now has me train through the pain in a safe, controlled environment, so that I’m prepared to handle any situation—like at a meet—in which endo pain may make an unwelcome appearance.

In the process of becoming an elite athlete, I sought out other women who compete while suffering with endometriosis. Despite one in ten women being affected by endometriosis, I was only able to discover two elite athletes on record as having it: one is Olympic swimmer Emily Seebohm and the other is Olympic cyclist Kirstie Klingenberg. Seeing the amazing accomplishments of these role models, I felt inspired. If they can compete while suffering, so can I—this is a message I hope to carry forward.

I want to help bring awareness to other women and serve as an example of how they too can go after their goals, even while they’re living with endometriosis.

Unfortunately, endometriosis is vastly under-researched, and research is underfunded. Because of this, there are several unintended consequences that come along with the burden of this disease. For example, I’m no longer able to compete in USAPL due to strict medicinal rules. Because my doctor-prescribed medications are not an allowed exception, if I did compete with them in my system, it would result in a lifetime ban.

While I’ve gone two years of competing without being drug tested, I knew that my time was up and sooner or later, I would need to test. I was on track to set two more state records and qualify for Nationals and The Arnold. These are major achievements and milestones for many powerlifters, and ones I was very excited and hopeful about.

Knowing that some of the medications my doctor had prescribed for endometriosis pain were on the banned substances list, I submitted a therapeutic use exemption (TUE) application two months prior to competing.

It was denied three different times.

I fully understand the importance of maintaining the integrity of the federation by honoring its strict guidelines. More than that, however, the denial is indicative of the lack of education and understanding surrounding endometriosis. I can’t help but wonder if the outcome would have been different had a women’s health expert been on the TUE committee.

Because of USAPL’s decision, I have switched to competing in United States Powerlifting Association (USPA). Because of my previous meet’s total, I will compete in IPL Drug Tested Worlds in Las Vegas on November 9th.

My journey with endometriosis, and its impact on my ability to live my life fully, has ultimately led to me wanting to speak up more about my disease and its effects. Losing out on competing at USAPL Regionals has been absolutely devastating. I’ve shed more tears over it than any other heartbreak. However, as with any relationship ending, it’s time to move on. Luckily, I can compete in United States Powerlifting Association (USPA) drug tested meets without fear of being banned for life simply for taking a medication prescribed by my doctor that allows me to maintain a normal quality of life.

For those reading this who think symptoms sound all-too-familiar: pain with your period is not normal. It’s not normal to be in the fetal position, incapacitated, or feeling like you may be dying. It. Is. Not. Normal.

Find a doctor who hears you and wants to find a solution. Be your own advocate. Reach out to other amazing women who live with endo. Seek a treatment plan that works for you.

My hope is that, one day, this disease has enough funding to find safe, reliable treatments that allow women to manage endometriosis symptoms and pain safely and reasonably —or, even better, find a cure. Until then, I’ll continue to share my story…and set PRs.

If you’ve ever faced hardships or discrimination as a female athlete or as someone who lives with endometriosis, know that you are not alone. Feel free to follow along my journey on Instagram at @nicholeholzum.

Nicole Holzum is a raw powerlifter lifting and living in St. Louis, Missouri. She is an endometriosis warrior and advocate.

We publish our pieces in the voices, styles, and structures of each writer and they do not necessarily represent the perspectives and experiences of everyone in Women’s Strength Coalition.  It is our intention to use the blog to highlight the experiences of our coalition members and draw attention to issues, questions, and events of meaning in our community. 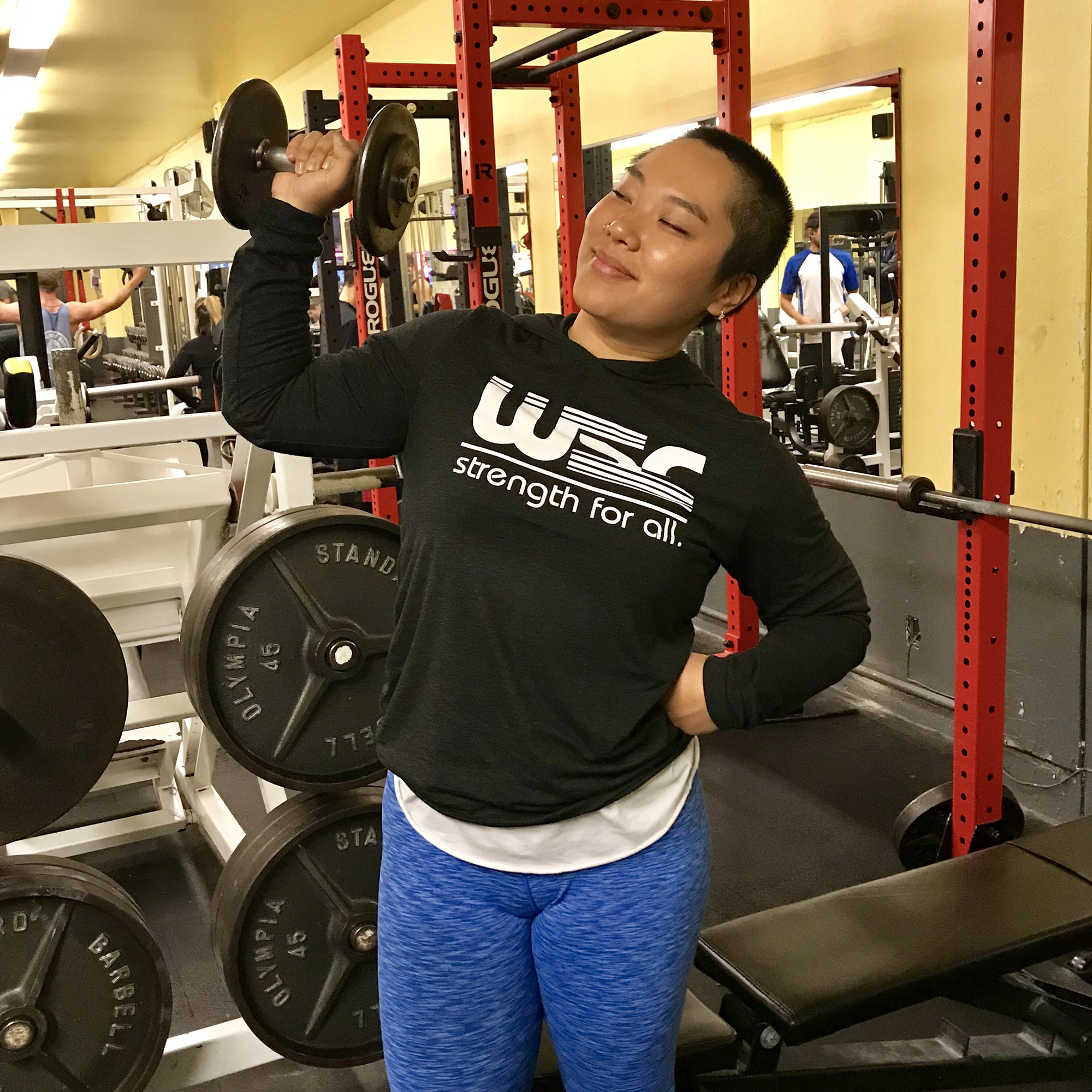 The Struggle For Strength in a Cultural Divide: An Asian Female PerspectiveArticles 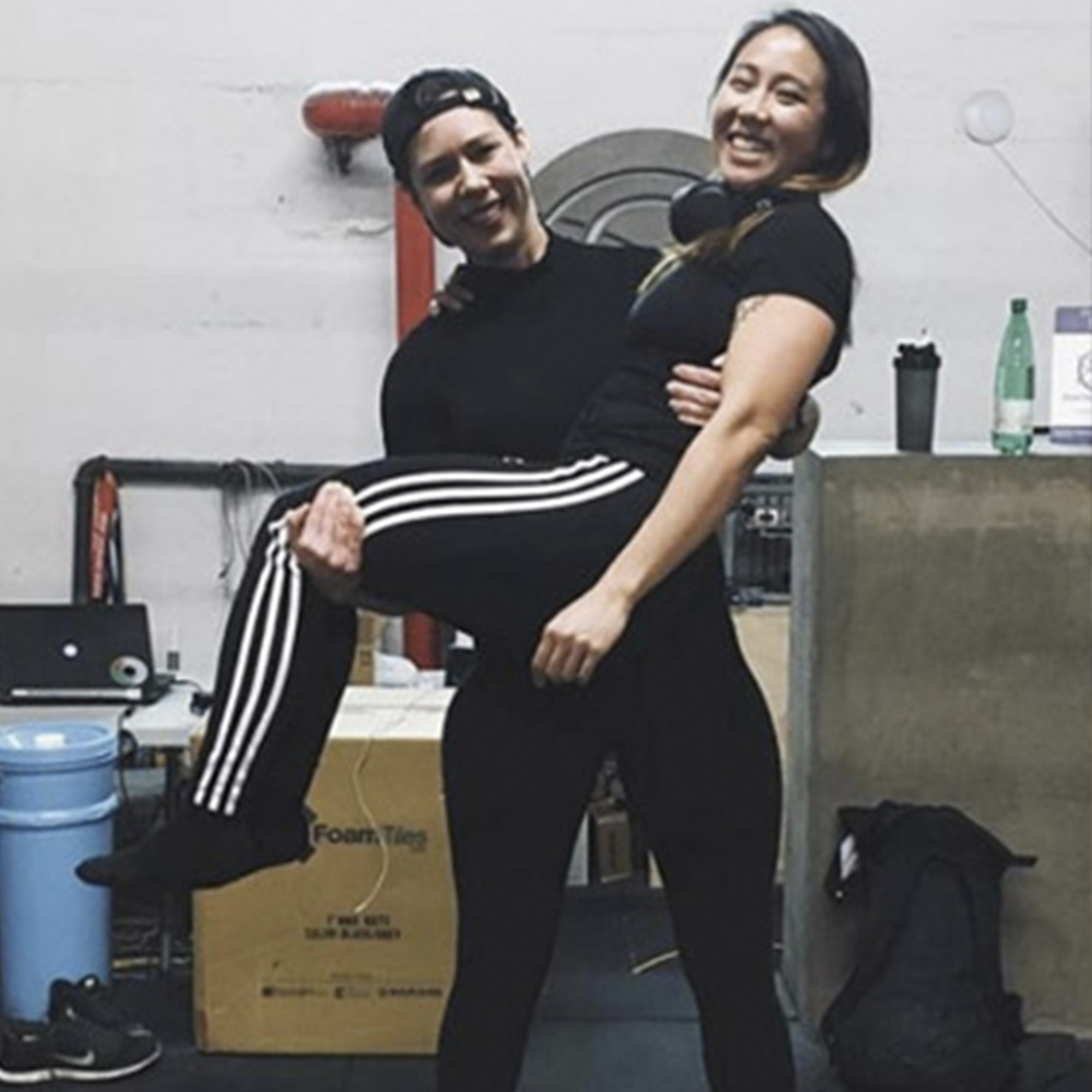 The Eye In The Mirror: How Mirrors Keep Women Out Of The GymArticles