Chelsea Savit On Training Mentality, Body Image, And Building Your Bench: Part One

Chelsea, thank you so much for taking the time to talk to us. You are a huge inspiration to the world of powerlifting.

You recently said: “Many of us love our bulky bods, myself included. I have worked for years to build this bulky bod, and even longer to accept and love it for the awesome things that it can do.”

A lot of women I know, myself included, come from a background of either having had an eating disorder, or have dealt with disordered eating in some way. Lifting and focusing on strength helps, yes, but there are still those days of struggle that seem difficult to transcend. Regarding body image, how did you come to this attitude of not just “acceptance,” but of love and appreciation. Are there still days where you struggle with body image, and if so, do you have any tools you can share with our audience?

That was a very loaded question.

It’s hard to say that there was one specific thing that really made a difference. I was a gymnast and an athlete for fifteen years before I found powerlifting. Gymnastics is one of those stereotypical breeding grounds for eating disorders and body image issues. Gymnastics coaches aren’t sports psychologists, and a lot of them are very old school in their coaching methods. Meanwhile, you’re prancing around in little leotards and meant to look pretty. When I was a teenager and doing gymnastics, I was very successful at it, but I am genetically programmed to have a lot of muscle mass and be very dense. I was doing the same thing as all of the other gymnasts, but I weighed 140lbs at only five feet tall.

So, naturally, I was the one that was picked on, or told, “Don’t finish your plate, Chelsea,” or, “leave a couple of bites on your plate,” or, “lose an extra five pounds.” After years of experiencing that, I had a lot of mental toughness on the exterior, but I was a very broken and emotionally unstable teenager inside.

That carried with me through college, where I got new gymnastic coaches who were more supportive of me. I thought that things would change when I had coaches who were more progressive, and used to dealing with adults. Despite all those external factors changing, I realized that I had internalized a lot of the issues that I was experiencing. Getting new coaches didn’t necessarily change how I felt about myself and my body. So, I started therapy, and I ended up quitting gymnastics because I didn’t think gymnastics was emotionally healthy for me.

I had body image issues, but I loved being strong and athletic, so I wanted to find something to fulfill that need. I tried the powerlifting club and squatted 185lbs on my first day there. And it was just a wildly different environment. It didn’t matter what you looked like, whether you were a puff or not–it was just about what you were lifting. I thrived in that kind of environment. It was just, go to the gym; train, no one talks about your body. It was really cool, and I excelled at powerlifting pretty quickly, because of my years of bodyweight training. It was a very, very, healthy environment to help me recover from all of those issues. I was having so much fun.

The more I got involved in the sport, the more I wanted to just go in and lift heavy weight, and I became obsessed with it. It became my new passion (although I was always a meathead at heart).

I got to my first powerlifting meet due to my now-husband’s encouragement. I got used to seeing 160lbs on a spreadsheet, and knowing that number was going to be broadcast to the world. Initially I was uncomfortable with it, but it was the norm. People talked about weight as if it was just a number–they didn’t talk about it as if it was a measure of your self-worth. It was an incredibly different environment for me, and I loved it.

This was before the age of Instagram, where everyone was posting their lifts! I hardly have any videos of my early years of lifting. Now, I take videos almost every training session and post them on social media. We’re in a new era, where people are learning about powerlifting not by finding clubs or finding packs of lifters in the gym (although I am sure this still happens). They’re finding out about lifting by finding people in social media and following them.

I still see powerlifting and the weight room as a places of healing. But now, with social media as the main source of information to newcomers to the sport, it might not have that same healthy atmosphere that it once had when I started, pre-social media era. That was our motivation for starting Beefpuff Barbell. We want to restore that healthy environment, and create a very healthy powerlifting community, through social media. I think we’re achieving that.

This way, people will feel good about themselves as they get into lifting. People consume media through images, so they might consume images that make them think that weightlifting and powerlifting is really about what you look like. And it doesn’t help that people who become sensational often look a certain way. The reality is that powerlifters come in all shapes and sizes (and there’s nothing wrong with looking pretty)! There are some really lean, conventionally attractive, successful powerlifters. But, there are also some stubby tanks, who feel great about their bodies and are very healthy. Some people might look up to those tanks as heroes because they are more relatable to them. One of our goals at Beefpuff Barbell is to show many types of people and bodies who have become successful at powerlifting, so that people can find their own heroes. The hero of powerlifting doesn’t have to look a certain way.

I was recently having a group conversation with some women that compete in the sport of powerlifting. We discussed the sexism, both subtle and overt, in the culture. Do you think the culture is improving, and, what can men do to either participate in the conversation, or help eradicate it? That’s also very loaded, I apologize.

What can men do? Maybe my husband should answer that one, because he’s great. He talks to me in such an uplifting way.

This goes back to part of your first question, that I didn’t really answer. I do still struggle with body image sometimes. It usually comes out when I’m having a really bad day at the gym, and feeling really weak. I start to say to myself, “Oh, you’re weak, and you’re fat, and you suck.” I know that’s horrible to say, and it’s not true, it’s just that deeply ingrained mechanism of beating myself up that I really have to try and stomp out. But, sometimes it engulfs me. Like a cloud.

I have the most incredibly supportive training partner in the world, my husband, Andrey. He was part of the conversations about starting Beefpuff Barbell. When I’m in those moments, he uplifts me. He tells me how I awesome I am, he reminds me that it’s just a bad day. He doesn’t fixate on my looks, he reminds me of what an awesome person I am. Surrounding yourself by people like that is honestly the best thing you can do, I think.

What else can men do? Be positive, be uplifting, be open-minded. Don’t assume anything about the struggles of women. Let them talk to you. Ask questions. Be willing to have difficult conversations, and be willing to have your worldview challenged. As soon as you open your mind, and allow your worldview to be challenged, you become aware of the struggles that women have. Having that level of awareness changes how you approach conversations and interactions with people. It’s impossible to change how someone feels about themselves, right? That has to come from within. You can be a sun, or a star, that uplifts and exudes positivity.

One thing that comes to mind is your critique of that recent Men’s Health article that went viral. It was nice to read someone else calling out this notion that, if you don’t look a certain way, your accomplishments aren’t worth talking about in a national magazine. That’s the way that it feels.

That post was very interesting. It was received very differently by different communities. I posted it on my Facebook, and I posted it on a women’s fitness forum. My Facebook has a lot of powerlifters on it. Female powerlifters understood the struggle, for the most part. It was very well received, and resonated throughout the powerlifting community. I got a lot of applause from powerlifters, which validated to me that this is how a lot of powerlifters feel nowadays. They don’t want their very healthy, safe space tainted, by people wanting to make money off of us and only featuring successful women of a certain aesthetic.

The way that it was received by a women’s general fitness forum was so different, though. They thought: “I think that this article is great. These women aren’t conventionally attractive! They have muscles! People see this, and this is so much better than where we were ten years ago because ten years ago we wouldn’t even show women with muscles.”

I guess from my echo chamber, the women in the Men’s Health article were gorgeous babes.

In my world, the women featured in the article don’t look manly. In my world they’re babes (this is not to diminish their accomplishments – they are very successful). But, maybe compared to a general fitness world, those women were huge. So, it made me think about how my message can be received by a wider audience. Everyone comes from a different place with regard to how they view bodies.

Wow, that’s so fascinating. I didn’t really think about that.

Right! People that are enmeshed in powerlifting, crossfit, or strongman, have a completely different standard for what is a “babe,” compared to general population. I don’t know anyone that would say “muscles are manly, don’t lift weights,” because I’m not in any of those communities where people say or think that stuff.

So, I think that means that we’re doing better. 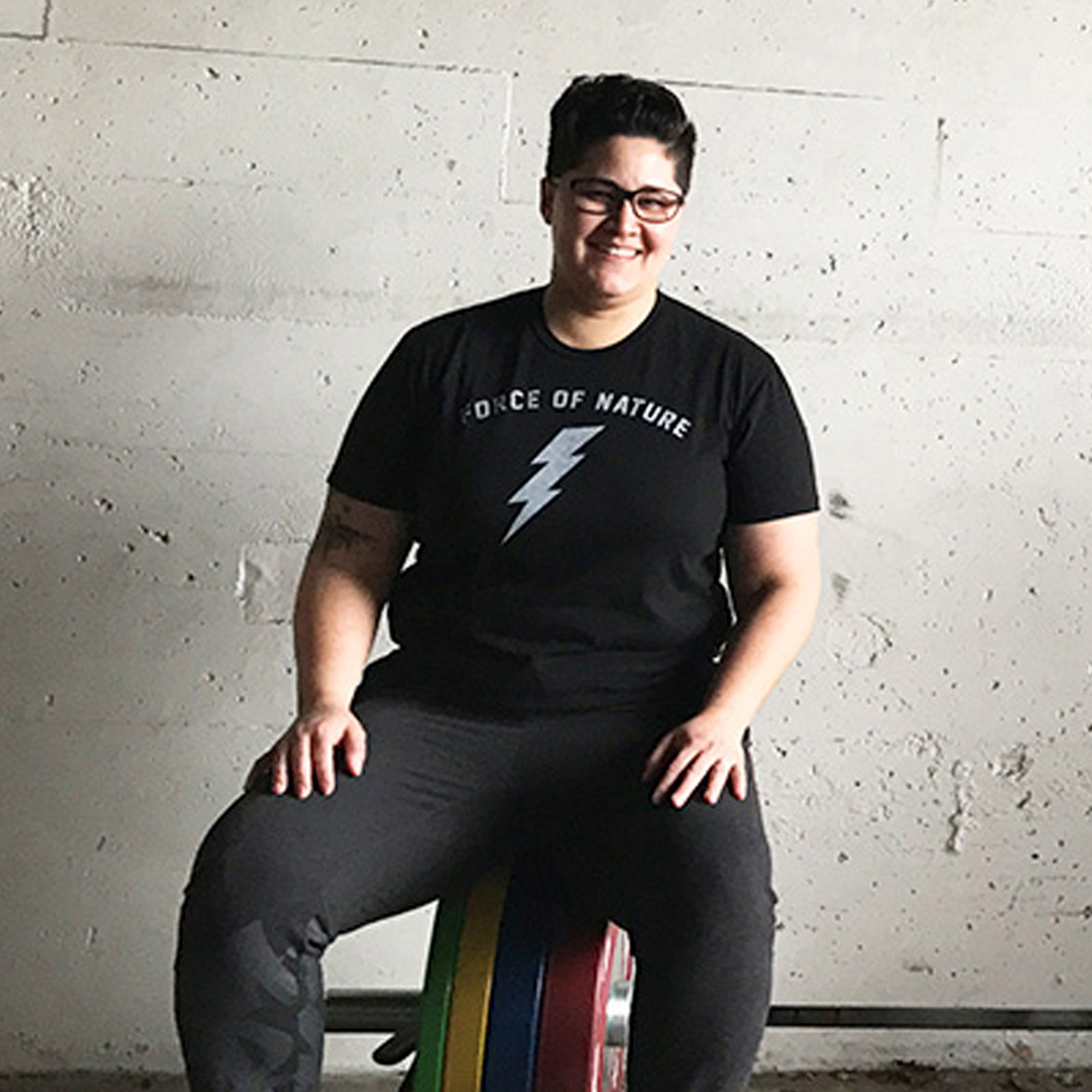